I’m happy to report that I have a new pair of running shoes. Last Thursday, I went to the local Ironman store on a mission-comfortable running shoes. With all the running I’m doing now, I need a good shoe. I’ve had knee surgery and have arthritis in both of my knees-thanks to figure skating for 8 years, so I needed a stable shoe. I went to the store straight from work-in a dress. Maybe not the most practical thing to wear when trying on multiple pairs of running shoes, walking back and forth around the store and attempting to squat and move around in the shoes. It was comical and a little awkward. D decided to join me on my little mission and met me at the store. After doing a little walking, I was told that I have a slight inward pronation (hope I said that right). So, I was brought many, many pairs of shoes that would help with that “issue”. 30 minutes in-I was getting the look. You know the look-the really, we’ve been here for a half hour, you’ve tried on 10+ pairs of shoes and you still don’t know what you want. Pick a pair and lets go!-that look. I’m sure he didn’t think it could possible take me any longer to pick a pair, but he was wrong. It was so hard for me to choose. There were so many pairs that felt great, but that was in the store. I didn’t know how they would last in a run or how they would feel after an hour of running. I narrowed down my list to a few and managed to take another 30 minutes to make a final decision. Needless to say-D got a very nice dinner for his patience ability to control his frustration with my indecisiveness. 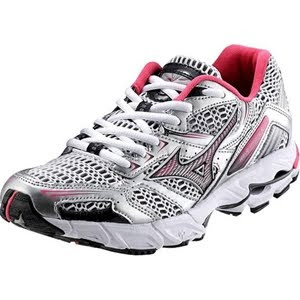 MIzuno Wave Running Shoes
Here are the shoes I ended up going with. I ran in them last night and they felt good. I felt a little off at the beginning of the run, but after a few miles I could feel the difference in the shoe. They were lighter and I was quicker. I didn’t have any pain in my foot when I was done. I was pleasantly surprised to see that I cut my 4 mile time by 2 minutes after the run. I guess a good shoe can make all the difference-mission accomplished!

Grateful Mama + Teacher who has a passion for creating, organizing, celebrating & homemaking. I’m embracing the ever-changing seasons of motherhood with the help of coffee, lots of it! Read More…

This error message is only visible to WordPress admins

Best of Simply Made with Love